Most of the geological phenomena that we can observe at the surface of the Earth, like volcanoes, earthquakes or plate tectonics, are triggered by the convection of matter that takes place deep in the Earth's interior, in the mantle. The convection is extremely slow, and occurs by the plastic deformation of minerals like olivine and garnets in the upper mantle (from 100 to 670 km), or minerals like ferropericlase and perovskites in the lower mantle (670-2000 km), in extreme conditions of pressure (up to 140 GPa) and temperature (up to 4000°C). The RheoMan project uses computer simulations to better understand the fundamental mechanisms behind the rheology of the Earth's mantle.

In this context, my work focuses on the plastic deformation of silicate phases with the perovskite structure that belong to the Earth's lower mantle, mainly MgSiO3 and CaSiO3.

Fig. 1 - The structure of the Earth's interior, and some examples of minerals found in the mantle.

Bridgmanite (Mg,Fe,Al)(Si,Al)O3 with the perovskite structure is the main contituent of the lower mantle. I model the Mg-rich member of this phase, the MgSiO3 perovskite, in order to characterize dislocations and their activity in both glide and climb.

The easiest slip system in related cubic and tetragonal perovskites (like SrTiO3 and KNbO3) are of the type <110>{110}. By analogy, it is expected that the equivalent slip systems are also the easiest ones in MgSiO3. In a cubic perovskite the [110] and [110] are strictly identical. Because of the octahedral distortions, in MgSiO3 these directions are different and are noted differently: [100]=[110]pc and [010]=[110]pc. We used atomic-scale calculations to model [100] and [010] dislocations of edge and screw characters, at pressures ranging from 30 to 130 GPa, typical of the Earth's lower mantle.

Contrary to SrTiO3 and KNbO3, where these dislocations dissociate with a large dissociation distance, in MgSiO3 these dislocations have a compact core structure, with no dissociation, with a width of 13 to 15 Å. Another surprizing result was to find quite large differences between the two slip systems studied. MgSiO3 has a lower symmetry, therefore these directions become slightly different but by no more than 5%. Yet the differences in the atomic core structures are much larger than that. In addition the two screw dislocations have similar Peierls stress at "low" pressure (P=30 GPa), but when pressure increases the [100] screw dislocation becomes more mobile than the [010]. These differences are attributed to the important octahedral distortions: the SiO6 are more inclined around the [010] axis than around the [100] axis [1]. 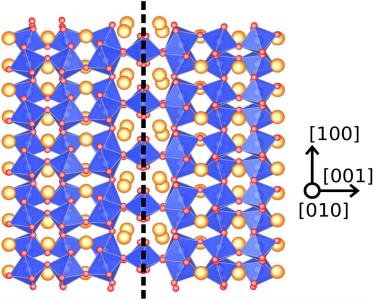 In order to account for the effects of temperature on the mobility of these dislocations we employed atomic-scale calculations to determine the energy of formation of kink pairs along the dislocation line. Then, using a model based on elasticity, we determined the energy of formation of a pair of kinks as a function of the applied stress. Such a model allows to predict the flow stress of the material as function of temperature, and as shown in Fig. 3 the model is in good agreement with deformation eperiments of that perovskite [2].

Fig. 3 - Flow stress of MgSiO3 at 30 GPa as predicted by the theoretical model (green curves) and measured experimentally (black points).

Dislocation-vacancy interactions and mechanisms for climb

The conditions in the Earth's lower mantle -high temperatures, slow deformation rates- can be favorable to another type of dislocation motion: climb. This process happens when a dislocation absorbs or emits vacancies, therefore it can be activated only if vacancies are mobile enough, i.e. at high temperature. In order to understand dislocation climb, we start with the study of the elementary mechanism: the interactions between a dislocation and vacancies.

These results show that in an ionic material as complex as MgSiO3, dislocation-vacancy interactions are not governed by elasticity. Dislocations and vacancies carry an electric charge, and therefore interact mainly through the Coulomb force, which is much stronger than the elastic interaction.

This change of core structure has a dramatic consequence: these dislocations become sessile, i.e. they cannot move in their glide plane anymore.